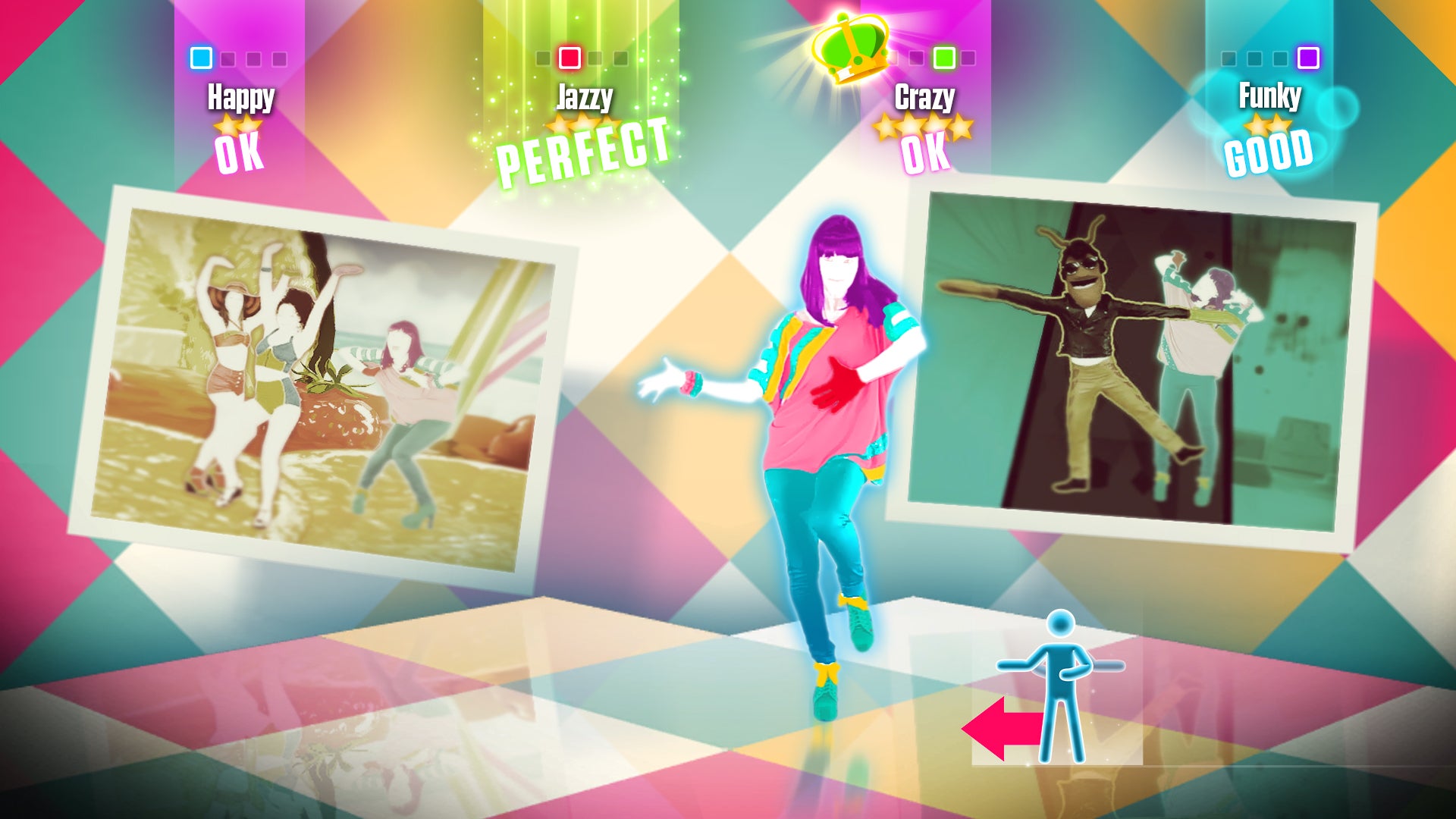 Two words sum up the five-year-old Just Dance series: “predictable” and “fun.” You know you’ll get recent pop hits, a few disco classics, and a smattering of novelty tunes, accompanied by color-saturated videos displaying simple dance moves for you to imitate. And you’ll earn some points, whether you’re trying your best or napping on the couch. But with impressive video production, more precise player tracking (thanks to the Xbox One’s Kinect, which is all but required to play), and a fully realized social component, Just Dance 2015 is a welcome, surprising reinvigoration of the series.

The 45 songs included in Just Dance 2015 are mostly of the pop variety, including recent earworms such as Pharrell’s “Happy,” “Let it Go” from Disney’s Frozen, and Katy Perry’s “Birthday,” but there are several curveballs as well. Classics like “Ain’t No Mountain High Enough” from Marvin Gaye and Tammi Terrell sit alongside “Holding Out for a Hero” by Bonnie Tyler and “Xmas Tree” by Bollywood Santa. Want to dance to the Tetris theme? It’s in there as well, along with Frankie Bostello’s “Mahna Mahna” (which you probably know from The Muppets).

You truly see your moves registering on the Kinect, and the sense of accomplishment from nailing a move is that much more gratifying because of it. However, while Just Dance 2015 is better at rewarding good dancing than past versions, it’s “points-for-all” scoring system means anyone who’s detected by the Kinect will end up with a score, regardless of whether they were moving at all. That forgiving nature will always be its Achilles heel, and reduces the sense that a high score was well earned. Dance Central this isn’t.

I’m not much of a dancer, and I wasn’t any better after playing, but that’s just fine with Just Dance. It’s more about having fun while moving to the beat. I’m guessing professional dancers look at Just Dance the way professional drivers might look at the Burnout series. These aren’t moves you’ll pull off in real life, but they’re certainly fun in a video game.

The Kinect controls are responsive, but my family and I often found ourselves reaching for the controller to navigate the menus. It’s just faster and easier, but even then, the menu and navigational systems continue to be as confusing and frustrating as ever. The new glossy look and fun graphical touches can’t hide some of the mind-boggling decisions made as to how this whole thing operates. For instance, you can’t just hit B to go back. Whether you picked the wrong song, or you’re looking for a different menu, you have to wait for a back button to appear at the top right, move the cursor up there, and then click. And the badges icon on the home screen that tells you how many you’ve earned -- that’s not a button. To actually look at your rewards, that’s a different button top right. Considering all the other upgrades Just Dance has received, it’s time the menus and navigation received the TLC they deserve. The one thing it does very right, though, is the voice-activated “Just Dance!” command that gets you right into the action once you’ve selected your song. That never got old.

Up to six people can dance at once locally, and players can jump in and out of a song as they please, making it ideal for parties or ending fights between children. And while I’m 6’4” and my youngest is three feet tall, we were both seen and scored appropriately (I won!). Then my wife and my seven-year-old joined in, and Just Dance 2015 adjusted without a hitch (my wife won).

Where you’ll really see Ubisoft’s effort is in the music videos for the dance numbers. While Just Dance has always been a celebration of color saturation, this year’s videos are, for the most part, much more creative and unique. For instance, this version of Katy Perry’s “Dark Horse” is inspired by the original, Egyptian-themed music video. A lead dancer, initially dressed as Cleopatra, morphs throughout the song into a variety of elaborate costumes. A chorus of digitally added dancers backs her up across a variety of dissolving Egyptian backgrounds, and it’s all impressively choreographed and lit. It’s truly entertaining, even if you’re a wallflower.

Meanwhile, the evolution of Just Dance into a multiplayer game has made huge strides this year. The series has flirted with social interaction in the past, but Just Dance 2015 is a full-fledged virtual dance party. Hopping onto the World Dance Floor takes you to a lobby where you can choose to dance against another player one on one, or jump right into a dance party with up to eight players competing for the high score. It all worked seamlessly, free of hiccups or lag.

Another social addition to Just Dance 2015 is the ability to take on a “ghost dancer” challenger, which reenacts another player’s high-scoring performance on screen and reveals how it was done as you compete against it. Similar features have long been a motivating part of racing games, and it’s nice to see this integrated so well here.

Watching videos uploaded by other dancers around the world is strangely compelling, and it’s fun to see how your videos have been received by the community. The Video Gallery is also proof that there are a lot of good dancers out there, and that Just Dance players are quite the diverse bunch.

If you don’t have a Kinect, you can play Just Dance 2015 by downloading the Just Dance Motion Controller app to your smartphone, using the motion of your phone to track your moves -- like a hi-tech maraca. It absolutely dilutes the experience, but it is an option.