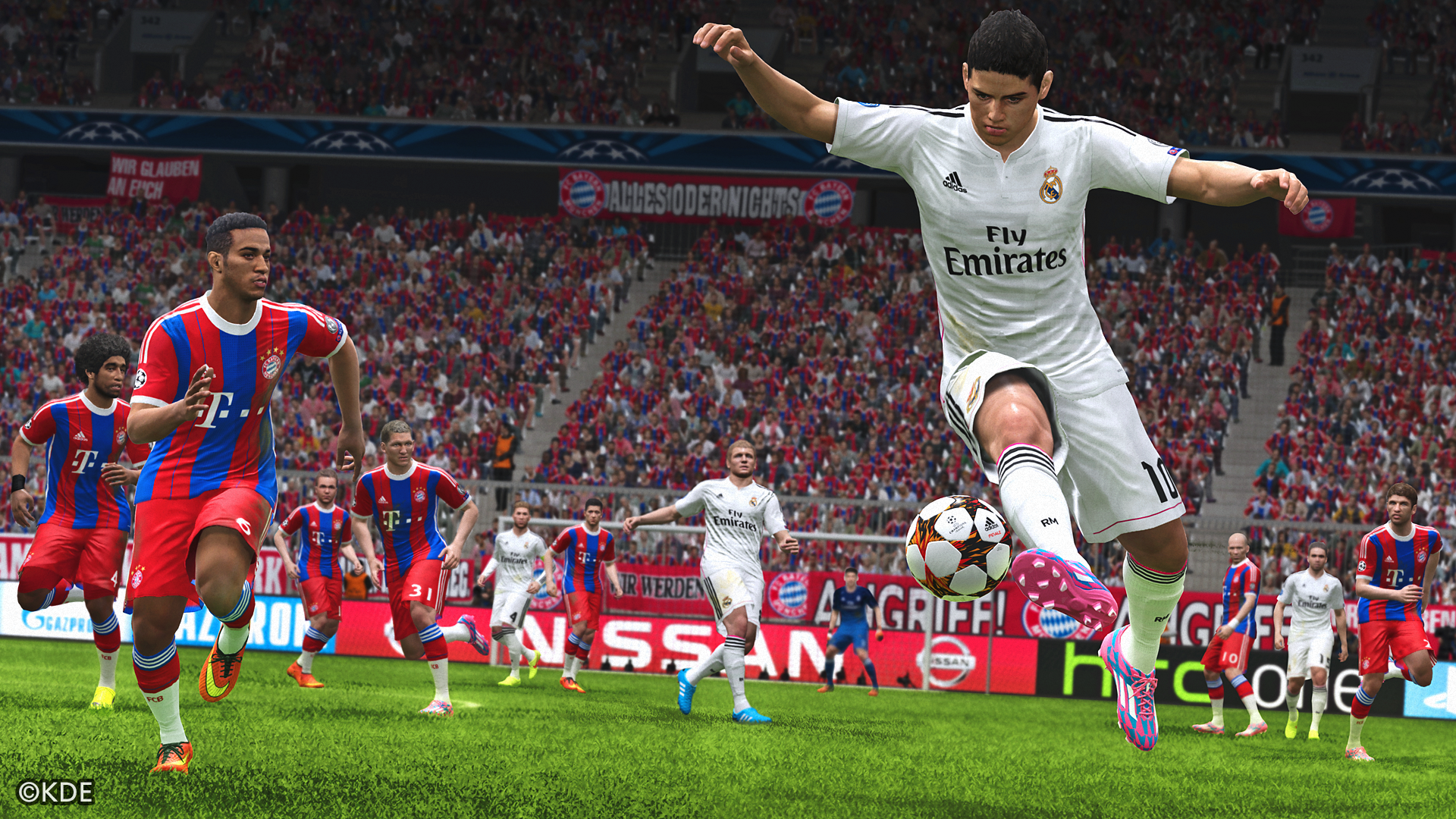 There was one moment during my time with it that I knew that old PES sparkle was back, and it wasn’t a sumptuous strike or a slick piece of build-up play. It wasn’t a spectacular save, nor a thrilling goalmouth scramble. It was a near miss.

Picture the scene: it’s a pulsating Serie A encounter between Juventus and Roma, played under floodlights on a dark, wintry evening. The game is enticingly poised at one apiece. Arturo Vidal jabs his boot forward to regain possession just inside his own half, and plays a simple square ball to Andrea Pirlo. He chips it forward: it’s a classic Pirlo wedge shot, aimed towards rangy frontman Fernando Llorente. It's Pirlo, so the ball's almost perfect; Llorente backs up, glancing at his marker, who unexpectedly climbs early and just about gets his head to it first. Carlos Tevez anticipates the loose ball, automatically backing up slightly to receive it as it drops. He’s around 35 yards out, and I glance at the radar to see the opposition goalkeeper a little way off his line. Tevez chests it down, and it sits up beautifully on the bounce.

I can’t possibly resist, and squeeze the square button, releasing just before the gauge reaches full power. The ball’s trajectory takes it quite high, but Tevez has hit it with topspin. The 'keeper, clearly not expecting a shot from range, backpedals desperately towards his goal as it comes down. He stretches out his fingertips, even though he knows he's not getting close to the ball. Yet he's in luck: it drops just over the crossbar, grazing it on the way, before rolls over the top of the net. The fans hold their heads in their hands and I follow suit.

I can’t remember the last time I enjoyed not scoring in a football game quite so much as this. PES 2015 can still be a little rigid in places, but I've not experienced anything close to that moment with EA Sports’ equivalent, FIFA 15. This year, ‘the pitch is ours’ is developer Konami’s mantra. This year, the pitch is accurate.

Firstly, let’s highlight the area in which PES compares most favourably to its biggest rival. It’s no exaggeration to say that the artificial intelligence here is some of the finest I’ve encountered in any sports simulation. The fact that it will go unnoticed by some is perhaps the biggest compliment you can pay it; it’s perhaps more starkly noticeable to me because of its apparent absence in FIFA. Here, wing-backs offer themselves on the overlap; midfielders drop back when possession is lost; defenders step out to play strikers offside; keepers sprint from their boxes to clear lofted through balls just before the opposition centre forward can lash it goalward. Mistakes happen, but they’re rare, and more commonly attributed to your own errors. It’s important because it means that any time you lose the ball, any time you concede a goal, it’s hard to blame anyone but yourself.

You won’t just see that intelligence in your own teammates, either. If a full-back gets a yellow card, you can bet a smart opponent will try to exploit that booking, focusing their sorties down that side of the pitch. If you’ve got a slow centre-back pairing, then you’ll see plenty of attempts to play pacy strikers in behind you, either via slide-rule through-balls or high passes aimed into space. You’ll need to identify not just your opponent’s strengths and weaknesses, but your own, plugging gaps, and modifying your attacking style.

There’s no one sure-fire way to win, and while there are a few sweet spots (a corner hit with just above medium power into that corridor of uncertainty between ‘keeper and defence was quite a reliable source of goals for me) you’ll rarely be able to rely on the same tactic twice. Opponents do seem to adapt, too: after scoring from two swift, direct counter-attacks as Real Madrid, Liverpool managed to cut off Cristiano Ronaldo’s supply line, and it took a scrappy last-minute deflected strike before he earned the match ball.

Pace and stamina matter, too. You’ll be able to rely on feints and trickery on occasion, but changes in direction and sudden bursts of speed are more likely to get you past your man. Sprinting at full tilt will usually get you tackled, but with wingers like Navas and Stirling, holding the ball before suddenly accelerating is the way to get you that extra yard of space to fizz in a cross. Your strikers will anticipate this, waving their arms as they pull away from their markers and move into the box ready to receive the ball. Runs are best used judiciously, too, as they’re the only way you’ll conserve enough stamina to stay efficient for the full 90 minutes. Opponents tire too, of course, so it’s not particularly noticeable until the later stages. Bring on fresh legs – particularly when you pit a nippy forward against a labouring defender - and you’ll be able to see the difference. It’s rewarding to see substitutions having such a tangible impact.

As a result of all this, not to mention the ability to more effectively control the pace of the game by putting your foot on the ball, PES is simultaneously predictable and unpredictable. It’s predictable in the very best sense of the word: in that you learn to read certain strategies over time, to grow accustomed to a team’s idiosyncrasies, to react to changes in personnel and tactics – even to instinctively know where the ball will end up when you release a pass or let fly with a shot. And it’s unpredictable in the right way, too: in that you can never rest on your laurels, in that the game unfolds organically, and there’s no single sure-fire route to success.

Elsewhere, PES’s much-touted myClub feels like a direct challenge to EA Sports. It’s an online-focused mode that invites you to build a squad from a team of no-hopers to genuine contenders, and if it takes plenty of cues from Ultimate Team, it makes for a solid, familiar structure. There’s a fine art to assembling a squad with a positive team spirit: you’ll need to recruit both the right manager and the sort of players who are a good tactical fit for their chosen style of play. Only then will you see the pitch’s heat map redden, denoting a stronger chemistry; it’s a slightly clumsier way of doing things than its rival, which makes everything a little more transparent, but the nuts and bolts of it work just fine.

There’s an interesting wrinkle, too, in the form of agents: the more you gain from completed matches - thus encouraging you not to quit before the full-time whistle blows - the more you’ll increase the likelihood of you signing your dream player. You can make things easier for yourself with day-one bonuses, while the rush of points you’ll earn from completing objectives for the first time – from chipped passes to rainbow flicks to goals – may be enough to unlock galacticos. I managed to nab both Andres Iniesta and Gareth Bale before my third match, both selected from what essentially amounts to a wheel of fortune. In other words, you’re once again beholden to the whims of the RNG, but at least everyone’s in the same boat.

You can grease the wheels by paying real money for PES’s other currency, myClub coins, though this feature wasn’t available at the time of writing. With bonuses for daily play and regular top-ups for in-game achievements, these seem a less egregious form of microtransaction than most, even if the mode itself is essentially Ultimate Team under a different name. Yet it lacks the polish and immediacy of its big-money counterpart, spoiled by a lacklustre user interface and a few baffling design choices. The process of adding new players into your squad is particularly confusing, the feeble tutorial forgetting to tell you that you need to release or deregister a current player first. Still, it’s had more attention paid to it than the rather bare-bones Master League option, a series mainstay that looks increasingly creaky in light of the competition.

The real acid test, however, comes with online play. It’s an area in which Konami has historically struggled, but I’m cautiously optimistic that the publisher has finally got things right. It’s early days yet, and perhaps this will change when the servers fill up, but I rarely had to wait long to find a game, and lag was either light or absent when I did. I’ve always felt PES was at its best as a couch-based multiplayer game, but it’s heartening to see such a robust online component.

It’s certainly more than enough to compensate for those remaining few off-pitch flaws, and for the continued shortfall when it comes to licensed content. Konami, seemingly aware it can no longer compete in that regard – even with a wealth of official international tournaments – has instead decided to play to its strengths. If it’s impossible to dismiss the allure of authentic chants, stadia, team names, and kits, it’s telling that PES 2015 is intrinsically rewarding enough not to require those hooks. Strip away the fripperies and there’s a clear winner – and this year, for once, it isn’t EA Sports.